PageLever, an analytics tool for Facebook pages, points to Twitter’s June 29 decision to stop syncing updates with LinkedIn as an explanation for the spike.

“The spike happened because without Twitter, there is now a significantly lower volume of content in the LinkedIn News Feed, and therefore less competition for clicks and attention,” Brendan Irvine-Broque, PageLever’s director of growth, tells Mashable in an email. “So any non-Twitter content (including links to Facebook Pages and Page Posts) is performing much better than before.”

Irvine-Broque adds that the spike happened “immediately after the change.”

Facebook page owners with more than 5,000 fans will soon have access to advanced post targeting options including age, gender, relationship status and education.Facebook began testing this last month, but only a small percentage of pages had access to the additional targeting parameters. Today some marketers received an update from Facebook saying that all pages over 5,000 Likes will get the option this week. Our own InsideFacebook.com page showed the following prompt this afternooon:

What makes for a great post in social media? It’s the question that haunts community managers and marketing directors. First, the bad news. You know it. I know it. But I have to point it out: The most effective posts and updates are going to depend on your community. If you have good analytics reporting and pay attention to your fans, you’ll figure it out eventually. (More good info on this here.)

Now, for the good news: There are, in fact, a few magic bullets for Facebook and Twitter. The following discussion covers only Twitter and Facebook. The best research is available for these two platforms more than any others. So let’s take a look at some of the available data to find the buzzwords that ignite your social media followers.

The buzzwords: “Please” and “thank you”

Didn’t your mother teach you anything? Sheesh. The exact same behavior that keeps everyone in the real word from thinking that you’re an asshole applies to the social media world too. Every time you post content for your fans, you are implicitly asking, “Take time from your day and look at this thing that I just posted.” You’re asking them to do something for you, so say “please.” And if they engage, say “thank you.”

Facebook has added sleuthing to its array of data-mining capabilities, scanning your posts and chats for criminal activity. If the social-networking giant detects suspicious behavior, it flags the content and determines if further steps, such as informing the police, are required.

The new tidbit about the company’s monitoring system comes from a Reuters interview with Facebook Chief Security Officer Joe Sullivan. Here’s the lead-in to the Reuters story:

A man in his early 30s was chatting about sex with a 13-year-old South Florida girl and planned to meet her after middle-school classes the next day. Facebook’s extensive but little-discussed technology for scanning postings and chats for criminal activity automatically flagged the conversation for employees, who read it and quickly called police. Officers took control of the teenager’s computer and arrested the man the next day.

Facebook’s software focuses on conversations between members who have a loose relationship on the social network. For example, if two users aren’t friends, only recently became friends, have no mutual friends, interact with each other very little, have a significant age difference, and/or are located far from each other, the tool pays particular attention.

via Facebook scans chats and posts for criminal activity

Facebook recently added an option for pages to make “unpublished” posts through the Pages API. Unpublished posts do not appear on a page’s Timeline or in fans’ News Feeds, but they can be promoted with ads.

Facebook ad and page management platforms can integrate this feature to help page owners test different creative options. Previously, page owners using the self-serve ad tool or Ads API could not run page-post ads without creating a post that would also show up in fans’ feeds. Now, for instance, a business can target non-fans with an ad that includes an intro video that might not be relevant to users who have already Liked the page.

To engage your fans, you need to post enough content but not too much at the same time. Is there a magical number for the ideal number of posts on Facebook?

No, there is no magical number. The average number of posts tends to range between 2 – 3 posts a day but there are just too many factors that affect the engagement of a post to say that it works for each brand. So what is the right frequency?

Below are the average numbers of posts per day by the top 10 Brands and Media on Facebook. We have gathered data from last month, from March 25th to April 24th 2012. 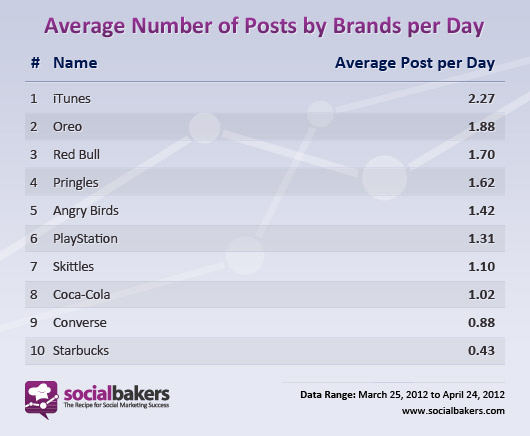 SOURCE: How Often Should You Post On Your Wall To Engage Fans? – Socialbakers. 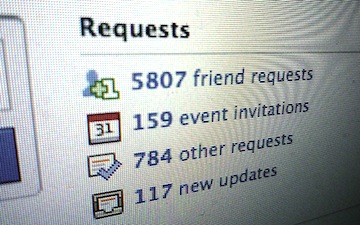 If you post often, you will see an immediate spike in News Feed impressions, but it’s generally not worth the cost in lost fans. When your fans see two status updates from you in their News Feeds, they’ll likely get annoyed, and will consequently unsubscribe or un-fan. There are few exceptions to this rule.

If you post too infrequently, you’re missing out on opportunities to reach your fans. Over the course of a year, a page with 10,000 fans that posts only half as often as they could misses more than 1 million chances to get their content in front of a hyper-targeted Facebook audience. The larger your fan page, the more often you should be posting — without annoying your fans.

via How to Time Your Facebook Posts to Reach the Most Fans. 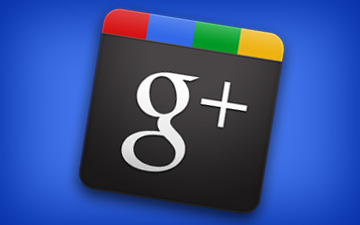 via Google+ to Support Pseudonyms. 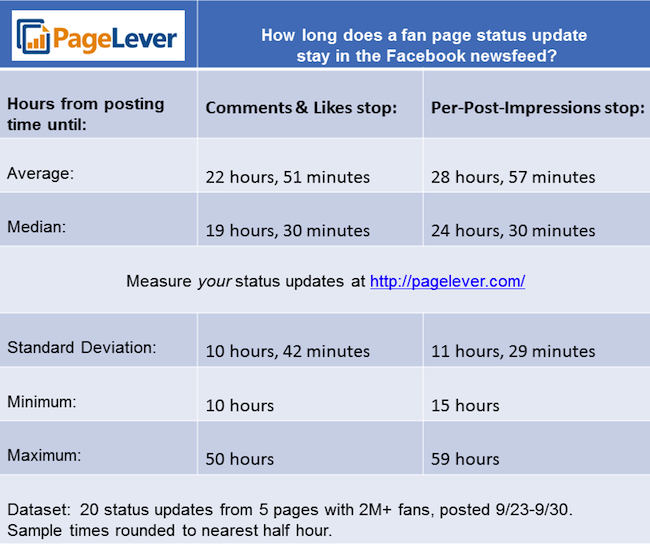 Facebook’s new Page Insights and some third-party tools can help you determine the lifespan of your Facebook Page updates. When your updates stop receiving Likes and comments, it may be time to post a new update to make sure you’re consistently engaging your fans. Here we’ll walk-through how to find your optimal Facebook Page publishing frequency.

PageLever ran a limited study of 20 posts from five Facebook Pages with over 1 million fans. It found that that average lifespan of a Page post in the news feed was 22 hours and 51 minutes. The median lifespan was 19 hours and 30 minutes. 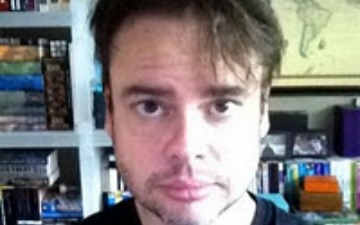 Then Yegge switches gears to talk about Google.”That one last thing that Google doesn’t do well is platforms. We don’t understand platforms. We don’t ‘get’ platforms,” Yegge wrote. “Google+ is a prime example of our complete failure to understand platforms from the very highest levels of executive leadership (hi Larry, Sergey, Eric, Vic, howdy howdy) down to the very lowest leaf workers (hey yo).” The G+ platform, Yegge wrote, is a “pathetic afterthought” and Google lacked an API at launch.

Google’s biggest blunder, he added, is that it didn’t emulate Facebook’s plan of building “an entire constellation of products by allowing other people to do the work.”