When some future Mars colonist is able to open his browser and watch a cat in a shark suit chasing a duck while riding a roomba, they will have Vint Cerf to thank.

In his role as Google’s chief internet evangelist, Cerf has spent much of his time thinking about the future of the computer networks that connect us all. And he should know. Along with Bob Kahn, he was responsible for developing the internet protocol suite, commonly known as TCP/IP, that underlies the workings of the net. Not content with just being a founding father of the internet on this planet, Cerf has spent years taking the world wide web out of this world.

Working with NASA and JPL, Cerf has helped develop a new set of protocols that can stand up to the unique environment of space, where orbital mechanics and the speed of light make traditional networking extremely difficult. Though this space-based network is still in its early stages and has few nodes, he said that we are now at “the front end of what could be an evolving and expanding interplanetary backbone.”Wired talked to Cerf about the interplanetary internet’s role in space exploration, the frustrations of network management on the final frontier, and the future headline he never wants to see.

In the past, marketing teams placed media “buys” in a limited number of traditional channels, such as broadcast or print ads. These channels acted largely independently. Measurements were straightforward, typically in the form of reach and audience. Social and mobile media are different in every respect. The new engagement channels are deeply inter-dependent, and their performance linked tightly to each other. This phenomenon has a name — its called media convergence.

Consider this data point. By 2013 lead management campaigns across four or more digital channels are expected to outperform single- or dual-channel campaigns by 300 percent. Thats because of the way customers use social and mobile media.

Yet CMOS are struggling. One study conducted by SapientNitro revealed that 82 percent surveyed believe improving marketing coordination across traditional, online, and social channels is moderately or extremely challenging. And the number one obstacle cited to digital marketing growth was lack of a single, cross-channel digital marketing platform.

Heres why. Customer behavior is extremely nimble across this landscape and buyers are influenced — and influence others — in buying decisions and brand loyalty as they move in and out of various websites, social platforms, and mobile media. For example, 83 percent of consumers globally are likely to visit a website recommended by a friend on Facebook, and more than half say comments posted on retailers Facebook and Twitter pages, whether positive or negative, also influence their opinions

MORE:  How to balance traditional, online, and social media – iMediaConnection.com.

The search engine giant is bringing the ultra-high speeds first to Kansas City, Kan. and Kansas City, Mo. In addition to offering two paid packages, Google is also rolling out a virtually free service for at least the first seven years. (Note: You still have to pay a $300 installation fee).

“No more buffering. No more loading. No more waiting,” the company notes on its blog. “Imagine: instantaneous sharing; truly global education; medical appointments with 3D imaging; even new industries that we haven’t even dreamed of, powered by a gig.”

To get things started, the company divided Kansas City into small communities called “fiberhoods.” Each fiberhood needs a high majority of their residents to pre-register to get the service. Those communities with a high pre-registration percentage will be among the first to get Google Fiber. Households in those communities can register for the service throughout the next six weeks.

Households in fiberhoods that qualify will be able to select from various subscription packages. Internet will cost $70 a month, while Internet along with television will cost about $120. The free Internet service (with the $300 installation fee) is also available for $25 a month for 12 months.

The Internet died two short deaths this weekend. On Friday, a thunderstorm near Washington, D.C. knocked out Amazon’s servers (which also hosts Instagram and Netflix). Last night, a leap second knocked out a good bit of the Internet.

The thunderstorm story is pretty obvious. A storm knocked out a bunch of servers and left 1.5 million in the D.C. area without power.

A lot of electronic devices link to the atomic clock, and these devices aren’t used to seeing the same second twice. And last night, when they did, things went to hell. Many sites, including Yelp, Reddit and the Gawker family were down.

One notable one wasn’t, though. This one inevitably prepared for months for a leap second no one else even knew about. This one is obviously Google.

MORE: The Internet died two deaths over the weekend | DVICE.

To start, they represent the top BuzzFeed articles in terms of the amount of views received in a single hour over the past year. In other words, these three articles saw the biggest spikes in traffic of anything weve published recently. But the similarities dont end there — these spikes all occurred within the same two-hour period of the day!

Theres always been the sense among publishers and marketers that content is key, and I dont disagree with that. Each of the examples above owes the majority of its success to the fact that people found the content interesting and sharable. But the fact that each example took off at the same time of day also illustrates a pivotal role that time of day plays. 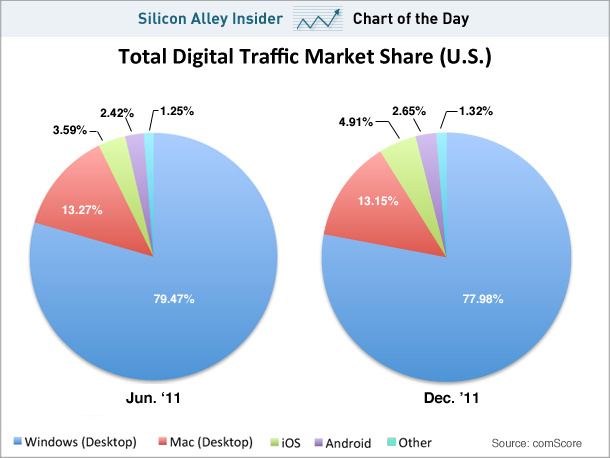 Despite the growth of mobile platforms, Windows remains the number one operating system by a long shot, according to data from comScore.

Stepping back further, six years ago it controlled 90% of the market. And there doesn’t seem to be any reason to believe Windows is going to reverse the trend anytime soon. 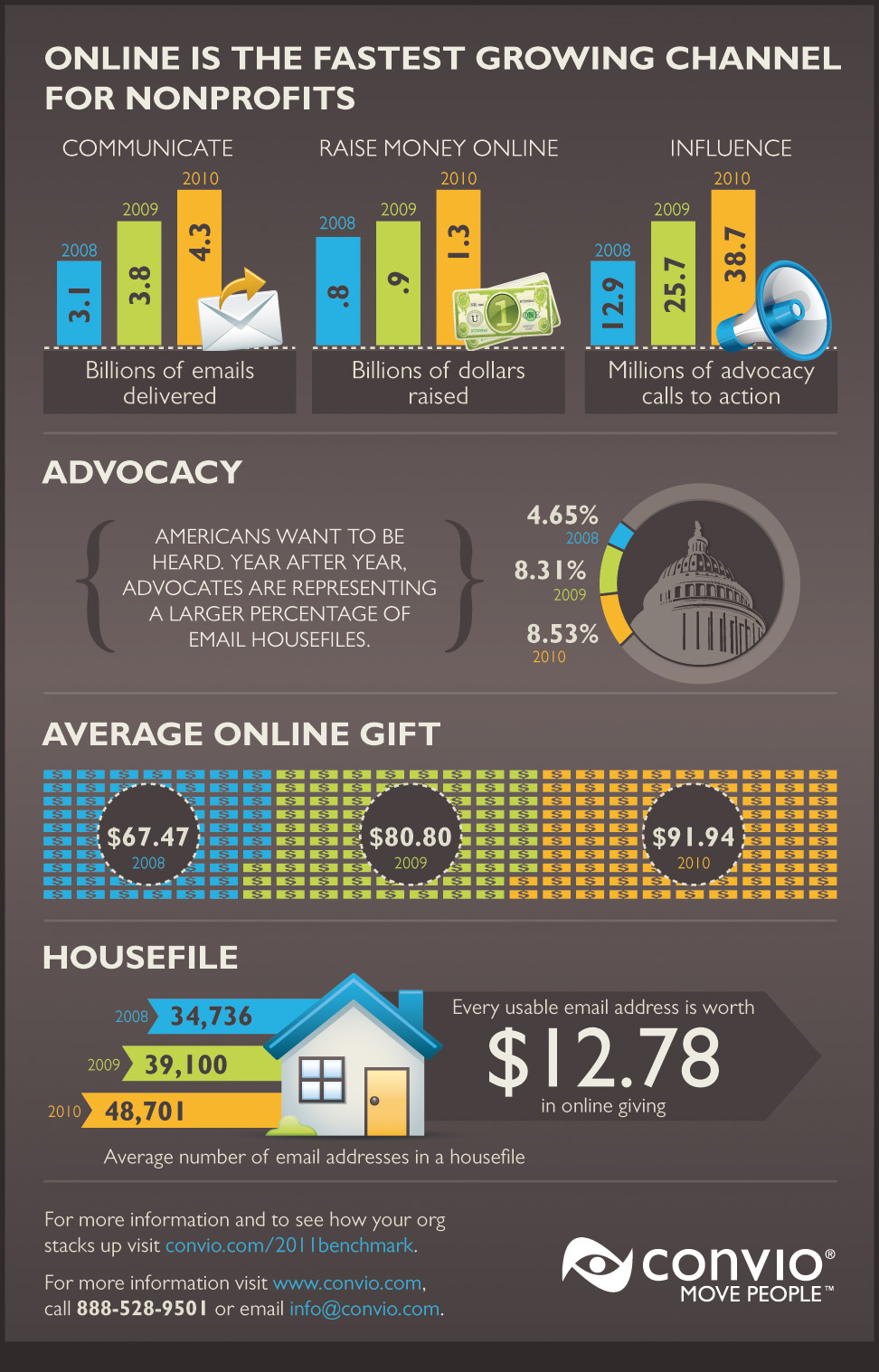 Everyone says it’s hard to measure social good success. Well, non-profit consultancy Convio begs to differ. The firm recently put out an infographic showing that the Internet is the fastest-growing channel for non-profits.

The graphic compares money raised, awareness gained and a variety of other factors across a three-year period. Since 2008, non-profits have cracked the $1 billion mark for online fundraising. In 2010, the average online gift jumped up to $91.94.

via How Much Money Do Americans Give Online? [INFOGRAPHIC].