The nature of Pinterest social community is more transactional as compared to other social networks . This is because its not only the numbers but the kind of ” product mix” Pinterest users engage in .

Not many know that 80% of the top Pinterest categories are related to commerce, and its no wonder why more jewelry,Apparels,and Cosmetic, Fashion and beauty chains are heavily investing on it As a result, Pinterest users who shop at Sephora spend 15 times more on its products than the brand’s Facebook followers. 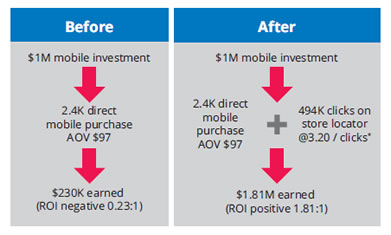 These two multi-channel retailers found that mobile store locators get feet in stores and dollars in the cash register.

RadioShack launched its mobile site in 2011, streamlining it to make it easier for shoppers to quickly find products and services. It includes a mobile, touch-optimized store locator with click-to-call and GPS functionality. After its launch, the retailer found the average order value increased by 30 percent.

An analysis of four months’ worth of data completed by RadioShack with Mindshare, its agency, found that 36 percent of clicks were on its store locator page. Based on internal data, they estimated that 40 to 60 percent of clicks on its store locator resulted in visits to a physical store. Of those who did shop at a store, 85 percent made a purchase.

Before this study, RadioShack had only tracked conversion on its mobile site; it didn’t have great visibility into how mobile search affected in-store sales. “It wasn’t a good way to capture the whole conversion process and how users are interacting. The study was trying to follow the customer through the whole experience,” says Lisa Little, RadioShack search marketing manager.

For those of us who are old enough to remember, in the late ’90s the “in” thing for every brand was to rush to build a website. Large amounts were spent out of marketing budgets for this “strategy.” Then once these sites were built, featuring a brand’s history, maybe a static coupon, a recipe or two, and some other features that quickly became dated, brands realized that a website without constantly updated information had no stickiness and thus became a non-factor for consumers. The technology to change content didn’t come for years, so brands sat with these big, beautiful, static websites that drew little traffic and did virtually nothing to drive sales.

Back in high school, the most popular kids did not automatically make the football team, score the highest on the ACT, or graduate at the top of the class just because of their popularity. Kids (popular and unpopular) achieved those accomplishments by working harder than the others.

Brands should think the same way. To put forth resources to solely be “liked” is not the best strategy. Is it more important to be “liked” or to generate sales?

MORE: Why Facebook “likes” are useless to brands – iMediaConnection.com.

Raj Ruparell, a four-month employee who was previously working on Groupon Goods, has replaced Brown effective immediately, a Groupon spokesperson confirmed. Brown joined the company in 2010 from Yahoo.

Following its initial public offering a little more than nine months ago, Groupon’s stock tanked 83 percent to an all-time low of $4.46 on Friday. Company stock spiked to $26.19 exactly two weeks after it went public and it has steadily declined ever since. Barely a year has passed since Groupon was routinely regarded as one of the fastest growing companies ever. The company, which gained prominence through its daily deals business, has suffered a series of key personnel departures and investors are reacting negatively to its latest earnings report.

Those of you looking to buy Google’s new Nexus 7 tablet may have a wait on your hands.

Unveiled late last month, the tablet has slowly trickled into the retail market. Google was naturally first in line, offering the Nexus 7 as a preorder in advance of its official mid-July launch. Other retailers, such as GameStop, Staples, and Sam’s Club, soon followed suit.

But a lot of eager customers apparently scooped up those pre-sales, since the tablet is playing hard to get at most outlets.
GameStop, which is selling the 16GB edition, is showing the tablet as backordered. Further details reveal that the gaming outlet has ordered more stock from the vendor, and blogging site ITProPortal says another shipment of tablets is expected to reach GameStop in August.

Staples, Office Depot, and Sam’s Club all show the Nexus 7 as currently out of stock with no further information as to its availability. Google’s own site is promising that the tablet will “ship soon,” meaning a 1-2 week delay.

The search giant today unveiled its 2011 Economic Impact report, and said that its search and advertising tools, including AdWords and AdSense, drove $80 billion in economic activity across the U.S. last year. The company was able to reach that figure with help from “1.8 million businesses, Web site publishers, and non-profits across the U.S.”

In order to arrive at that figure, Google used some fancy math. The company estimates that businesses that use AdWords make $2 in revenue for every $1 they spend on the advertising platform. In addition, the company assumed that a business will receive five clicks in search results for every one click on their ads.

Mass market paperbacks may be taking a serious hit in sales these days, but check out this infographic showing the explosive growth in e books.

The pushback Amazon received from states on the Internet sales tax issue is gaining momentum with e-tailers of all sizes finding themselves the target of new legal and regulatory initiatives. The latest example is Missouri-based Scholastic Book Club, which the Connecticut Supreme Court found owes $3.2 million in sales tax, plus interest and penalties to the state, reports the Hartford Courant.

The court found that the club has enough of presence in the state for it to collect sales tax on the company’s book sales.

In February, the Americans for Tax Reform noted that more states are moving in this direction.

Wasn’t it just four years ago that the pundits and game media gathered in wake, made a few pithy quips about graphics and soundcard drivers, and poured their 40‑ouncers over the grave of PC gaming? Well guess what, baby—PC gaming ain’t dead by a long shot. In fact, there’s a strong argument that PC gaming is not only alive and well, it’s thriving and poised to dominate consoles.Don’t believe us? Battlefield 3, one of the most anticipated launches of the year, only offers 64-player goodness to those on the PC, and tweaks the frak out of PC-only graphics that make game consoles look like peddlers of VGA output in a 1080p world. Smash a window in Batman: Arkham City on a PC with PhysX support, and you’re rewarded with glass particles flying everywhere—just as if you threw a thug through a plate glass window in real life. Do that on a console, and you’re rewarded with a pathetic tinkle.

Let’s not even talk about The Elder Scrolls V: Skyrim, which has enhanced textures and graphics on the PC that its developer, Bethesda, says will “melt your face.” And hell, we haven’t even gotten to the PC-only titles of Star Wars: The Old Republic, Dota 2, and Diablo III, or the free-to-play phenomenon and MMOs.So are we seeing a resurgence of PC gaming, or are we just fooling ourselves?

via Maximum PC | The Return of the King: Why PC Gaming is Making a Comeback.

Google is on track to earn $2.5 billion this year in mobile ad sales, Larry Page told investors during Googles third quarter earnings call today. That growth is led by mobile search activity, with mobile display ads a lesser factor.Overall, Google grew aggressively during the quarter, reporting revenue growth of 33 percent and overall quarterly revenue that was just shy of $10 billion.