Opera has built a new Web browser from the ground up, and it’s available now on Windows and Mac.

The new Opera, which the organization is calling Next, its channel for what used to be known as “beta,” was built from scratch, it claims. What has resulted is a much cleaner interface and a host of features that Opera says, will make it easier for users to find contents.

The big change is that Opera has replaced its proprietary engine Presto with the Chromium engine. That will allow the company’s browser to load more quickly and handle slow network connections more effectively. 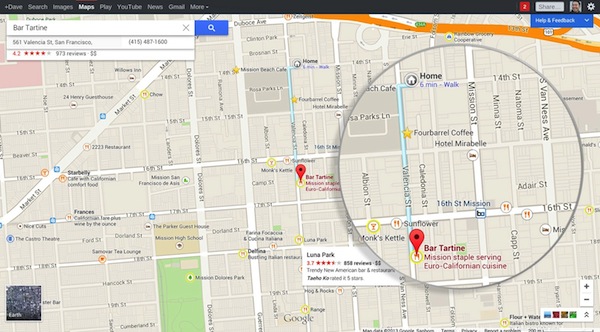 Google has announced a revamping of Google Maps and it is much more than a few changes. It is a reworking of the entire Google Maps interface from the group up, designed to make Maps more intuitive for users.

One major change is users can now click on any area of a map, and Google will respond by showing you information about what is in the area that you could be interested in, such as restaurants, businesses, and hotels. This is designed to make it easy for visitors to see what is near a particular location, such as discovering what is located near a hotel when someone is visiting a city.

There is much more connection with Google+ and what they display on the map popups, meaning it is much more critical for businesses to make sure their Google+ page is active with correct information, including hours and photos, and user reviews of their business.

Google Reader, one of the world’s most popular RSS readers, is shutting down on July 1, 2013, Google announced Wednesday.

The search giant is pulling the plug on the 7-year old project citing “declining usage.” Google says it is shuttering Reader and deprecating or shutting down a number of other services as part of the company’s “spring cleaning” initiative — one that seeks to help the company focus on the features that need the most use.

In addition to Google Reader, the company is also ceasing sales and updates for the Snapseed Desktop apps for Mac and Windows, shutting down its CalDAV API, as well as ending support for Google Voice for BlackBerry.

Still, the biggest and most forcible change is the death of Google Reader. Google will allow users to export their data — including subscriptions — using Google’s Takeout service, as well as the OPML export within Google Reader itself.

A Blow to News Junkies

Use of traditional RSS readers have slowed in recent years, thanks in part to Twitter and apps such as Flipboard. But Google Reader — and RSS in general — is still tremendously useful for individuals that follow lots of sites and web feeds. 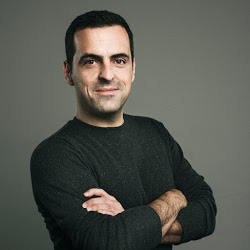 When Google unveiled its latest mobile operating system to the world last week, the company asked a reserved but extremely confident man named Hugo Barra to grab the microphone, and celebrate Android 4.1 as the best mobile operating system the world has seen. It couldn’t have been easy to sing the praises of an OS code-named “Jelly Bean” with a completely straight face, but Barra, Android’s director of product management, was cool and composed as he shared Android’s latest killer features.

There was the new graphically enhanced search tool, Google Now. There was the new voice-based search assistant — Google’s answer to Apple’s Siri. And there was also a new piece of hardware — the Nexus 7 — which would show off Android’s full potential. Barra anchored all these announcements, reporting the Google I/O news that the world was most interested in hearing.

And now he speaks directly with Wired about Google’s mobile future. We sat down with Barra last week at Google I/O to pick his brain about the Nexus 7, and all the other key Android announcements. Here is the edited conversation.

READ MORE:  Android Director: ‘We Have the Most Accurate, Conversational, Synthesized Voice in the World’ | Gadget Lab | Wired.com.

Google Now is arguably the single best feature found in Android Jelly Bean, and soon, it seems, it may be coming to iOS, Windows 8 and Chromebooks everywhere.

Google Now brings you search results before you even go looking for them. Just swipe up, inside of Google’s search app (or from any home screen on a Nexus 4, 7 or 10), and Google Now activates. From there, the Google search app delivers today’s weather, your Google Calendar appointments, directions to home or work (depending on what time of day it is), a heads up to nearby events, the score from your favorite sports team’s latest game, boarding passes, package tracking, dinner reservations and a lot more.

Facebook is testing a new interface for how users share items on the desktop site, which includes more prominent options for where users can post the story.

AllFacebook found that some users are seeing a new menu when they click Share beneath a post. Right away users can select whether they want to share the item on their own Timeline, on a friend’s Timeline, in a group, on a page they manage or in a private message. Previously these options were hidden under a drop-down menu on the share dialog. 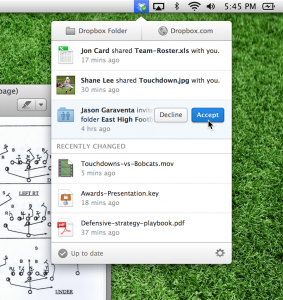 Although this is the eighth time that the Dropbox desktop client has been updated this year, this latest build (version 2.0) is significant because the tray menu has not only received a much-needed facelift but also some added functionality. The new and improved Dropbox menu keeps the user informed of the most recent file changes and notifies them in real time when something is shared with them.

“We’ve made it easier than ever to accept invitations to shared folders, see links or albums that people have shared with you, and keep tabs on what’s changed in your Dropbox,” wrote Dropbox engineer Max Belanger in a blog post Tuesday. 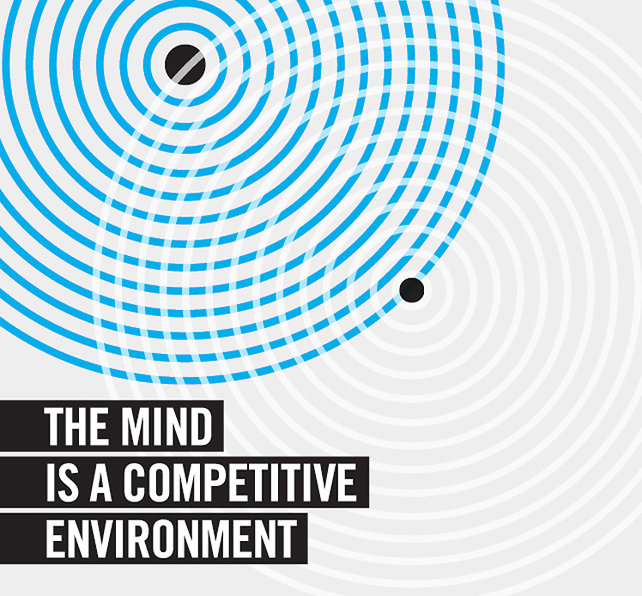 Near the end of 2012, a group of us at Ziba got together to review what we’d learned over the course of the year. Working with dozens of clients who serve customers around the world, we designers spend a lot of time observing people as they interact with technology, services, and experiences, noticing how they seek solutions to everyday problems and make decisions. In the process, certain patterns emerge so forcefully that they’re practically unavoidable.

Meeting over three sessions spread out over a week, 23 Zibites (designers, researchers, and creative directors) discussed the patterns we’d seen, and distilled them down to the 12 insights we thought were most current and useful, to us and to our clients. Each one is presented here, as a brief essay that suggests how it will affect business practices in 2013, and as an illustration created by one of Ziba’s designers.

via The 12 Trends That Will Rule Products In 2013 | Co.Design: business + innovation + design.

YouTube has opened up its new design for channels, so far available only as limited beta, to all users.

The YouTube One Channel, as it’s called, gives users the ability to slap a big header (called Channel Art) on the top of their channels and to have a video trailer which starts playing for all visitors who aren’t yet subscribed to the channel.

The new Channel Art-adorned channels, YouTube claims, will look good on any screen size and any device.

We asked designers to change the future by designing an app for Windows Phone that would help us create, connect or simply impress our future selves. You answered the call with hundreds of amazing and inspiring submissions from scrapbooks and font managers, trip trackers or convoy road managers, to diaries that don’t broadcast your every thought or will even seal them up for the future. After hours of review and deliberation by our fantastic jurors Chris Caldwell (GSkinner.com), Jennifer Bove (Kicker Studio), Corrina Black (Microsoft), Pratik Kothari (Techark Solutions), and Eric Ludlum (Core77), we are proud to announce our 50 finalists and five winners!