The 7-inch Android tablet is one of the scrappiest models in the gadget landscape. From one manufacturer to the next, one year to the next, these tablets have failed to find an audience or win any vocal supporters. Yet sales for the 10-inch iPad continue to vault higher with each quarter. All the while, companies keep trying to make 7-inchers work, hammering away at the form factor, making the same mistakes (underpowered internals, chunky bodies, poor performance), expecting different results.

The form saw its first measured success with the Kindle Fire, which cracked a few million unit sales in a single month during 2011’s holiday season. But the Fire’s reception then, and sales performance since, doesn’t suggest a raft of blissfully happy customers. While Amazon’s tablet has a couple of enthusiastic fans here at Ars, the guess in our review that it would “end up often as a gift from early tablet adopters to late ones” seemed to come true. You wouldn’t buy one for yourself, perhaps, but it was a good enough present for the technologically apathetic: Mom, Dad, Grandma, or Technologically Illiterate Sibling.

Enter stage right—well, more like stage from above, the God of Tablets bombing down in a skydiving suit wearing Google Glass—the Nexus 7. Google adopted the internals of Asus’s Memo 370 shown at CES in January, revamped the body, and bequeathed the device with Android 4.1 Jelly Bean. All while maintaining a $199 base price point.

The specs, design, and cost all make the Nexus 7 seem like the Holy Grail of tablets. As we’ll show later, it can even keep pace with the (significantly more expensive) iPads in many respects. It’s great. Suspiciously great. Suddenly we have everything we want (well, close to it), for less money than we probably would have paid for it. Selling hardware cheap—in hopes that more money can be made elsewhere—is not a new game. But the Nexus 7 suggests Google is going to play that game harder and better than we’ve seen in a long time.

Check out this graphic. When it comes to sales from mobile devices, Apple’s ipad is King, bringing 45% of all mobile sales. 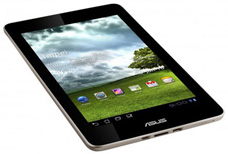 HP cut the price of the TouchPad from $500 to $99 earlier this month, after announcing it was pulling the plug on the product. Since then, the item has been hard to find, as customers rushed to get their hands on the discounted tablet.

The new demand prompted Mark Budgell, HP’s PR Manager for Social Media Strategy, to address the issue in a blog post Monday. Budgell said he had no information about whether more TouchPads will become available. “We will have more information available in the next few days about whether or not more will be available and if so, what the details will be about the situation,” he wrote.

via HP’s TouchPad May Have a Second Life.

Thanks to a new partnership between Verizon Wireless and Intuit, business customers can get the mobile card reader for free after a $30 rebate and the activation of a GoPayment account. The card reader and its app can be found at all of Verizon’s retail stores and as well as its business-to-business outlets.