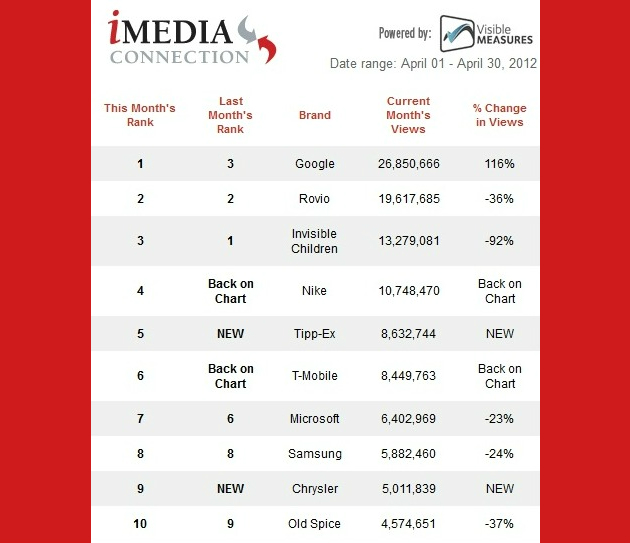 In April, the Top Brands in Video chart saw debuts from Chrysler, a long-established American brand, and Tipp-Ex, a lesser-known European brand aiming to make an impact in social video. Additionally, Nike and T-Mobile made comebacks after short hiatuses from the top 10 slots.

Powered by data from Visible Measures, this monthly chart looks at the most-watched brands in online video, across all of their campaigns.

On average, it will cost $55,600 to attend Princeton, Penn, Michigan or Stanford next year. But now you can enroll in online courses at all four universities online for free.

The universities won’t just be posting lectures online like MIT’s OpenCourseWare project, Yale’s Open Yale Courses and the University of California at Berkeley’s Webcast. Rather, courses will require deadlines, evaluations, discussions and, in some cases, a statement of achievement.

“The technology as well as the sociology have finally matured to the point where we are ready for this,” says Daphne Koller, a co-founder of Coursera, the for-profit platform classes will run on.

“This is a group that didn’t grow up at a time when there weren’t browsers,” Koller adds. “They have the mental state that allows them to say, ‘I’m willing to get a good portion of my education online.’”

Coursera grew out of an experiment in Stanford’s computer science department that opened up a handful of classes to non-Stanford students via the Internet. The online students received a signed letter from the instructor (but no credit) upon completion. 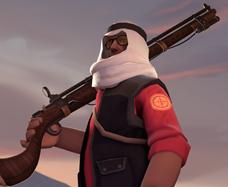 You may not have heard of all the free to play games coming out recently they don’t tend to have the same marketing budget as your Battlefields and Call of Dutys but you should probably be paying a little more attention. Sure, some of them are a little shallow, or unfair to non-paying customers, but there are F2P games in every genre, and a lot of them are top notch.So why pay to play? Read on for our list of 25 top-notch free online games. For each game, well tell you what you get for free and what costs money, so you never get surprised.

via Maximum PC | The F2P Revolution: 25 Killer Online Games You Can Play For Free.